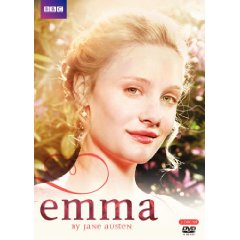 I ran across this by accident yesterday on Amazon. There is a new BBC adaptation of Jane Austen’s Emma, starring Romola Garai (pronounced “ro-MO-la Garry”). This was a television mini-series, and although it does not appear to have aired in the U.S., it has already aired in the U.K. The reviews on Amazon are very positive, so as a Janeite I am honor-bound to add this to my collection. Emma is not my favorite Austen novel, nevertheless the characters are as always beautifully drawn and the wry observations on life and human nature are present.

Second, for the Tarot aficianados, a couple of discoveries.

First, for the Tarot-faerie-Froud fans, news of a new deck and book oracle set by Wendy and Brian Froud! The Heart of Faerie Oracle is due to be released March 1, 2010. No sign of the cards on their Web site, though, which is a bit disappointing. They could give us a peek at one or two, wouldn’t you think? If you can find some, let me know. I’d love to get a look at them. Not that I doubt they’ll be fabulous, I’m just impatient! Their Web site calls it “the long-awaited sequel” to The Faeries Oracle. Again, not a standard Tarot deck, it will comprise 68 cards. You can pre-order it at Amazon.

And a second forthcoming deck, The Shadowscapes Tarot by Stephanie Pui-Mun Law.

When I first saw it, I immediately thought of the Paulina Tarot, by Paulina Cassidy, and while there are some similarities, the Shadowscapes Tarot seems more refined, less child-like. The watercolors always attract me, and some of these cards are quite vibrant. It’s a full 78-card deck, and through her Web site the author also offers prints, and figurines based on the deck. The cards appear to be loaded with small details that I’m sure will repay close study. The artwork is dreamy and lush. The deck’s foundations are definitely in the Waite-Smith, but with some very fresh takes. This one is also available for pre-order through Amazon.

22 thoughts on “A few little discoveries which quickened my heart”