Yet another Tarot post, so if you have no interest in Tarot you can skip this one.

With all my Tarot collecting, and fascination with vampires, of course I have to blend the two and have been picking up every vampire-themed Tarot deck I can find. My latest addition to this sub-genre of my collection is the Favole Tarot by Spanish artist Victoria Francés. This is an unusual deck in that the artwork was not created specifically as Tarot cards, but was put together from her existing work, apparently with some modifications done to some images to fit the theme. Not the best idea perhaps, as some work better than others. Some are just downright puzzling even if you like the style. Most, if not all the figures depicted are vampires, some bloody, others brooding and mysterious with hollow eyes.

As I was sifting through the deck this morning deciding which cards to showcase, this one popped out and fell to the floor. Many readers take that as a sign that it’s a card you need to pay attention to. So here is the Sun card:

Quite possibly the gloomiest Sun card I’ve ever seen. Be that as it may, I like gloomy, and I like fog and mist-covered wetlands, so this works for me. It makes me think of a swampy area I pass on the way to and from work, and I have long wanted to get photos of it in the autumn when it lies shrouded in fog in the dim morning light, the trees on the hills behind it partially visible. It’s so atmospheric, it’s given me several ideas for storylines. One day, not a work day,  I need to go out there in the early morning and get some good photos. There’s no chance during the morning commute because it’s a very narrow two-lane road with no shoulders, bounded on the east side by a rocky cliff-face, and on the west by the wetlands so there’s no place to pull over out of traffic.

Some of the other Majors are well-suited to the use they’ve been put to. For instance, I really like the Temperance (La Templanza) card.

In place of the winged angel, standing with one foot on land, the other dipping into a stream, here we have a ghostly figure, partially manifested, bridging the worlds of spirit and matter. She has  enough physicality that she is able to carry a candelabra but it’s obvious she’s a ghost.

The minors in this deck are really different. In place of the usual suits of wands, cups, swords and pentacles, we have Masks, Butterflies, Crosses and Flowers. The little fold-out instruction sheet provided with the deck gives absolutely no hint as to which suit corresponds to which, so it’s every reader for him/herself as to what to make of them. I didn’t even notice as I selected which cards to scan that I had inadvertently chosen 2, 3, 4 and 5.

Unfortunately, they are, as you can see, unillustrated pip-style cards, except for the Aces which have more artwork to them.

But here’s my take on which suit is which. I see the Crosses as Swords. Both are made of metal, and both swords and religion have been used to control people. Masks I see as Wands, for obvious reasons. The masks are mounted at the top of a wooden wand and the background color of the cards is a tan/yellow color, closest to fire. Butterflies I attribute to Cups, with the pink background, and the sweet sort of happy feeling butterflies tend to inspire. Flowers seem an obvious correlation to Pentacles/Earth, since they grow out of the ground, and the green background of the card is a link in my little peabrain to money, grass, earthy things. Feel free to disagree. I’ve seen other sites that attribute the Masks to Swords, which I don’t get at all. But as I said, it’s kind of a free-for-all in deciding what’s what. I worked out a system that makes sense to me, and I can remember.

Now on to our delicioso Devil. I couldn’t get this card out of my head for days after I got the deck. Interestingly, the same male seems to be pictured on the King of Crosses: 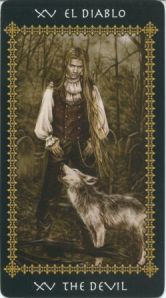 All I have to say to that Devil is, “Here’s my soul, I had it gift-wrapped for you.”