Little bit of a hodge-podge, music and Tarot.

So, I was trolling EBay, looking at Tarot decks (whistles innocently, looking skyward) — ok YES I fell off the wagon — and saw a package deal I couldn’t pass up consisting of two decks, a book and what was touted as a rose quartz stone. One of the decks I’d actually been looking for for some time, the Cachet Tarot, aka Top That! deck. It’s cheap, even brand new, but included with it was El Gran Tarot Esoterico from Fournier. I never really wanted that deck, but the seller was kicking it in, along with an old paperback copy of Waite’s book, “The Pictorial Key to the Tarot” which I didn’t need since I have a hardcover copy, and like I said, a faux rose quartz stone which turned out to be a lump of pink striated plastic (it weighs nothing, is not cold to the touch like real rose quartz, and… well you get the idea). So ok, I didn’t need or want most of it, but the whole shootin’ match was $5. FIVE BUCKS. Who could pass that up? Not me, that’s for sure. Both decks are complete and in good condition, although the boxes are kind of hammered, and neither had a LWB. 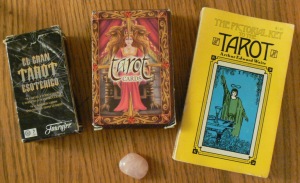 I have once again been captivated by a deck I scarcely wanted. Yep. El Gran Tarot Esoterico. As I went through it putting the cards in order to make sure all were present, I discovered I really like the art on this one. Here’s a sample:

This deck places The Fool between cards 20 – Judgement (El Ciclo) and 22 – The World. The deck is also heavily based on Qabalah and Gematria. Unfortunately, I am not up on either subject, and without the little white book, a lot of the symbolism is lost on me. :::frown::: I can still read with it, but I always feel like I’m missing out on several layers of meaning.

The other deck, variously marketed as the Cachet Tarot, or Top That! (I think Top That! was the publisher, but there is no writing of any kind on the box, and no copyright or anything on any of the cards, no extra cards with the usual advertising). The first time I saw one of the cards, the Star, it was attached to a reader’s listing on EBay, using it like their avatar. The colors were so vibrant and of course I had to track it down and find a copy. That was almost a year ago. It’s not that hard to find, I lost a couple of auctions for a copy on EBay, but for $5 I was willing to take it sans original box and book. The illustrations on the Majors are an odd mix of Egyptian themed and medieval Europe, minors are pips. 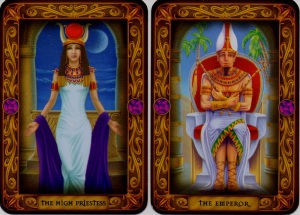 Some of the people are really cartoon-ish, but the colors are really nice, rich and deep.

And I borrowed the title for this post from this song, Animal, by Neon Trees. They’re out of Utah, and I love the fact that their drummer is a girl! Saw them in concert here last year when they were one of the opening acts for 30 Seconds to Mars, really excellent live. Good luck getting this song out of your head now. You’re welcome.