Did you ever have the experience of thinking you see something out of the corner of your eye, but when you turn to look, it’s not there? And yet everytime you look away, you could swear it’s back, just at the edge of your vision, taunting you, daring you to look again and catch it? Like a ghost that vanishes when you turn, and all you see is a shadow sweep around the edge of the doorway. And there’s nothing in the hall when you go to look. I feel like I’m grasping at ghosts, trying to remember something but never quite able to.

I’ve always had an interest in history, particularly with how the common people lived their lives, how they got through a day, what they did in the time before electric appliances, running water, easy entertainment, or any sort of leisure time.  I feel like I’m trying to find my way to somewhere, or some-when, like a half-remembered place or time. I don’t know where this came from, it’s not anything I was conscious of or spent anytime thinking about until I saw this movie, “The Eagle.” Now I can’t stop watching it. It’s coloring everything I do. It’s like trying to remember something I was supposed to be doing, connected with these characters. Did I die in another time, owing someone a favor? Money? WHAT WAS I SUPPOSED TO DO?

I study each scene for what the people wear, what sort of tack they have on their horses, what they might be eating in their bowls, how they address eachother, make jokes, grooming (most of the Celts were pretty unkempt, and yet one little girl who appears for only seconds on screen has her hair neatly pulled back, looking much like any six-year-old child might today). I feel like I’m trying to remember how we did things back then. So what the hell am I looking for? If I only knew. I could swear it’s just there, if only it would stay still when I turn to look.  I keep looking for some clue or some bit I’ve overlooked that will unlock the mystery of my obsession. I’m grasping at every lead, every faint scent of a trail, and I still don’t know if I’m making any progress.

At least all my Latin books arrived today. Yippee! 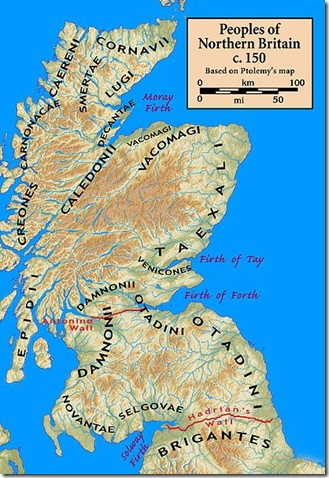 Here’s Northern Britain in roughly the time period I’m fixated on, with the various Celtic tribes shown in their territories. The Brigantes shown south of Hadrian’s Wall occupied the largest swath, holding most of modern-day Scotland and extending into the Midlands. Ptolemy mentions Brigantes in Ireland, and there have been artefacts of Brigantean origin excavated on the island of Lambay. He also lists them as living in what is today Waterford, Kilkenny, and Wexford. My family hails from County Cork, where Waterford is located. It’s possible some of them were Brigantes if we dug back far enough in ye olde family tree. I love the word Brigantes, I have no idea why.

The name Brigantes  is thought to refer to the Celtic goddess Brigit, a daughter of Dana, or Danu, the mother goddess of the Celts. It would translate then as “People of the Goddess Brigit”, or Brigantia. Brigit and Brigantia were likely the same, coming from the root word “Brig” with slightly altered names, sharing many of the same qualities. John Lemprière states it comes from “Briga” or “Brica” which was the term used by the Gauls and the early Germans, and meant a town or village.

Aside: This is not the root of the word ‘brigantine’ or ‘brigand’ which comes from the Old French brigan, a form of the Italian brigante, meaning an irregular or partisan soldier.

I’ve spent most of my life feeling disconnected, out of place, rootless, as if I don’t belong where I am, no matter where I am. I suppose at the core of all this is trying to sort out where I do belong.

Is this a by-product of the American melting-pot? Feeling rootless, untethered in time and space? But why does this time period call to me so strongly? I have no idea. Maybe it’s just an effect of living in our crazy modern world, where many of us yearn for a simpler time. Sure, life was harsh, and much shorter back then, but who had to worry about how their 401k was performing? Buying medical insurance? Getting snowed under with credit card bills? You knew who you were and what you had to do. Maybe that was enough. Call me crazy, but there’s something to be said for that. You didn’t have drug cartels, organized crime, drive-by shootings. Not that things couldn’t get violent then. There is no idyllic time in history, life has never been a safe place.

But I’m getting quite an education thanks to all this.

I’m not even sure what I’m trying to say. All I know is I am haunted, and this movie makes my heart ache.

11 thoughts on “Out of the Corner of My Eye”