I wrote this post at the urging of  a couple of guys who wanted suggestions of books and movies to try to interest their spouses in science fiction. So I thought, ok, it could be that many women have simply not been exposed to it, or are not aware of the range of science fiction styles that exist. Traditionally it has been the nearly exclusive domain of men, as writers and consumers. Not entirely, of course, although many people remain unaware of women’s contributions to and interest in the genre. Most famously, Alice B. Sheldon wrote under the pseudonym James Tiptree, Jr. to get her work noticed and accepted in the ol’ boy network. To the delight and amusement of sci-fi girls ever since, her work was deemed “ineluctably masculine” by Robert Silverberg. Anyway, point being, women have had a hard time being taken seriously in sci-fi, so you can understand how it can be off-putting to many women.

With that in mind, you must accept the fact that she may NEVER like sci-fi. You must. Accept it. Everyone has their own tastes, and just as you would no sooner read romance, it may be that she will never share your love of sci-fi. To each his or her own. It’s nice that you want to share, but allow for differences. Also, there are many flavors of sci-fi: military, hard, soft or social, cyberpunk, time travel, alternate history, apocalyptic, space western, and more. She may find some of these sub-genres appealing and not others.

However, that said, if she is open to giving it a try, allow me to suggest some of my personal faves in both books and movies that I think will appeal to women more than the military or ‘hard’ sci-fi. I happen to like most of it, but that’s me, not her. And you didn’t marry me. Your mistake, but we’ll let that slide.

Try to find out what she doesn’t like about any of the sci-fi you may have dragged her to in the past. Is she not interested in the attack sequences in BSG? Too much politics and intrigue and soldiers behaving badly? Skip the military. Was Avatar more of the same? I’m not even going to go into how much I hated that movie with its cardboard, two-dimensional stereotypical characters, not to mention the cultural strip-mining… OOPS. Well, anyway, I hated it but not because it featured military stuff. Maybe she doesn’t get Star Trek with all the talk of dilithium crystals, and warp nacelles, positronic matrices, venting warp plasma, rerouting control to the battle bridge… I love Trek, in all its incarnations, although TOS (The Original Series) is still probably my favorite. It was the chemistry between the main characters that made the show, much as the cast of “Firefly” inspired such a loyal (ok, rabid) following, of which I am one.

So let’s dig back a little. One of my all-time favorite sci-fi movies was

Yep. Love it. I think it was grossly underrated. The story had a real message, the characters were fun, there’s the romance between Jason (Robert Urich – be still my heart) and Princess Karina (Mary Crosby) which may help your wife/girlfriend/significant other ease into the rest of what’s happening. There’s some campy humor, villains, anti-heroes, swashbuckling pirates, froggy alien women, time travel.  What’s not to love about a movie with a character named Killjoy (John Matuszak)? This movie had it all. It’s lighter fare than Star Wars which preceded it.

Oh, this is just too wonderful. Jeff Bridges plays the awkward but benevolent and curious alien who gives Karen Allen her heart’s desire.  It spawned a short-lived television series that sadly lacked the charm of the movie. In the movie you’re rooting for Starman to outrun the government agents chasing him as he tries to experience some earth culture (cherry pie being one of our good points). The humanity and relationship between Jenny and the Starman is what makes it go. But it makes you think. What would happen to an alien who came here to learn about us, and became the target of a manhunt by the government? What would you do? Help him, or turn him in? It received an Oscar nom.

Brilliant scientist Eleanor Arroway (Jodie Foster) devotes her career to searching for extraterrestrial life, to the chagrin of her superior played icily by Tom Skerritt. Matthew McConaughey plays her sometime love interest/nemesis Palmer Joss. When she picks up a real signal from space, the government once again steps in and takes control, almost shutting her out of the process of making contact. In the end, she realizes her dream, but then has little support when no one believes her. Jodie Foster took home the Golden Globe for Best Actress in a Drama. It won several other awards, including the Oscar for sound. 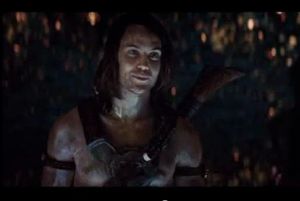 Just go see it or rent it on Netflix when it becomes available. It’s fun, the chemistry between John Carter (Taylor Kitsch) and Dejah Thoris (Lynn Collins) is wonderful. I’ve talked to lots of ladies who loved it, so it’s not just me. The guys like it, too. I’ve heard from guys who saw it three times in the theater. It’s got some steampunk-y flying craft on Mars, which was fun. The story is not so convoluted that you can’t follow who’s who, and even though it’s based on Edgar Rice Burroughs’ vision of Mars which is all wrong scientifically, it is humorous, visually arresting, has interesting sympathetic characters, and a great musical score by Michael Giacchino. OMG I love this movie, I’ve got the DVD on pre-order through Amazon, but it’s not out until June 5. Argh.

Don’t try to start off with Alien or Event Horizon or Mad Max. And hold off on the comic book characters. If she’s not into graphic novels and doesn’t already know and love the characters, most of the movies based on them are not going to help.

On to the books. As much as I love books like Neuromancer by William Gibson and Altered Carbon by Richard K. Morgan, they’re not for everyone. Gibson in particular is not an easy read. He introduces a lot of tech and ideas and lingo, and there are a lot of threads and intrigue, a lot of layers to it. It’s not beach reading. It is also violent. Not the best choice to start someone off in the genre. Brilliant, but it’s heavy duty cyberpunk.

Instead, I suggest starting with something like Clifford D. Simak (I loved Way Station), Walter M. Miller’s A Canticle for Liebowitz, Philip K. Dick’s The Man in the High Castle, or Roger Zelazny’s Chronicles of Amber.

Just about anything by Ursula K. Le Guin (The Earthsea Trilogy might be more fantasy than sci-fi, but a great intro to her work. Just ignore that terrible SyFy channel movie based on it), Anne McCaffrey’s “Dragonriders of Pern” series, Lois McMaster Bujold’s Vorkosigan novels, Joan D. Vinge’s The Snow Queen, Margaret Atwood’s Oryx & Crake (although she has repeatedly denied the classification of sci-fi for her work). Maybe your wife doesn’t know women write sci-fi, as well as read it. Starting off with a book written by a woman might make it more palatable, less like a ‘boys club.’

So there are a few ideas run up the ol’ flagpole, see if anyone salutes. But honestly, unless she’s got some latent geek tendencies, it’s probably unreasonable to expect her to suddenly take an interest in space ships and ray guns. Good luck, and let me know how it goes.