Our weekly card. Sometimes I pick one out that seems to be vying for my attention more strongly than the rest, but this week I went through the whole deck and couldn’t decide on one (although there were several contenders) so I shuffled and cut the deck and let the Cosmos decide what we needed this week.

So, who’s feeling all Napoleon-like? Anyone? Raise your hand.

As usual, this is from the Art of Life

Tarot by Charlene Livingstone. The painting detail is from “Napoleon Crossing the Alps” by Jacques-Louis David. Turns out there are five versions of it, and this particular one is called the Charlottenburg. Since it was painted around 1800, I think it’s safe to assume the artist had some knowledge of what Napoleon looked like. So there he is, looking at us through the ages. Of course the painting is highly idealized, David wasn’t actually there during the crossing of the Alps to pose his subject. 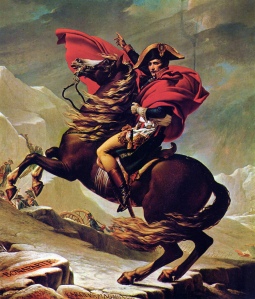 So what can we make of this? The King of Wands in the Tarot is Fire of Fire (each suit corresponds to an element, and each court card – King, Queen, Knight, Page – further corresponds as Fire, Water, Air, Earth). Explosive energy, this guy. Boundless enthusiasm. He’s the one who dreams up the battle plans and organizes everything. Sounds like ol’ Nappy to me. He’s a hard-charger, and it’s never occurred to him not to try, or that it couldn’t be done. Does it always work out? Course not. Ask Napoleon about his trip to Russia. Maybe that cold put out the fire. He sure gave it the ol’ college try, though, didn’t he?

But nothing’s going to happen at all if we don’t have the confidence in ourselves to try.

And with that, I’m off to work on a story that I will hopefully be able to submit somewhere very soon. What are your battle plans for the week?